"Am I a passionate bird? Yes! Guilty as can be!" ― Red in the first angry birds movie

None (Most of the games)

Most of the Birds and some pigs

Most aof the pigs and some birds

This article uses information from the Angry Birds Wiki. As a result, some information may be copy-pasted over.

Red is the main protagonist of the Angry Birds series of games created by Rovio Entertainment. He was introduced in 2009 as the icon of the original game and a core member of the original flock, as well as the leader. Red is usually the first bird introduced in the Angry Birds games, though there have been times where other characters are in his place. (especially in spinoffs) After his first appearance in Poached Eggs, he has become a prominent character for the series.

Red's a natural leader: strong-willed, outspoken, and decisive. Knowledgeable and self-confident, he can intimidate other people who may mistake his confidence for arrogance.

Red is shown to be a very grumpy, short-tempered bird. He is short to anger, often getting angry at others when they do not coordinate with him. This causes a separation between him and other birds, even being isolated from all the other birds as shown in the Angry Birds Movie. At this stage, he was deep down very lonely but refused to associate with the other birds.

However, once the eggs are stolen, Red is raised up as the leader by the other birds, who had previously refused to believe him. Here, he proves his leadership qualities in his strong desire and passion to save the eggs.

Red is the leader of the flock, which mainly includes The Blues, Chuck, Bomb, Matilda, and Terence. (along with Hal, Bubbles, Stella and Silver, who aren't as involved but still are part of the flock) While he doesn't have any abilities as the other birds do, he does have strong leadership skills that help in battle.

Red is a very loyal bird, and confides in his flock very much including Chuck and Bomb, his best friends/confidants. He is very strong-willed and dedicated, allowing nothing to distract him from protecting the eggs.

Red made his first debut in the original Angry Birds game as the main character and icon. He is first introduced in Theme 1-1 as the very first bird to the players. From then on, the following levels are mostly based off of teaching the player how to play the game/use Red, and from then on he appears often as a playable character.

Ever since the game first exploded and became very popular, Red has become a very noticeable and iconic character.

Red is pretty much the same exept his power! 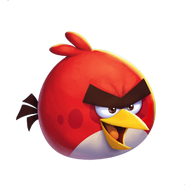 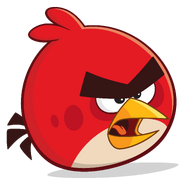 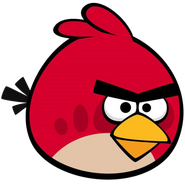 Classic red
Add a photo to this gallery
Retrieved from "https://angrybirdsfanworld.fandom.com/wiki/Red(a_new_hope/ABDX)?oldid=2393"
Community content is available under CC-BY-SA unless otherwise noted.