Science and the study of the Universe.

Someone interrupting his work, Pigs stealing the eggs at the worst time.

Bubbles, Rest of the flock.

Every pig working under King Smoothcheeks.

Magic?! Pfft, you mean science right? There's no such thing as magic.

Plum is a plum colored bird who lived in Golden Island, but then moved to Cobalt Plateaus on Bird Island. After migrating there, he made friends with bubbles. He is the second bird to be purple besides Gale. They are the same species, before Luca was born, Plum moved away from Stella's flock to the main flock because Gale caused havoc to the whole island.

Seemingly a violet-backed starling, Plum has a plum/violet coloured plumage along with a white belly. His black eyebrows resemble that of Red's. He also has four squarish tail feathers along with two long crest feathers with plum-coloured tips.

Plum was initially a part of Stella's flock, before Luca was born. During that time, he mainly liked to help out Dahlia, his tutor, in her laboratory. Dahlia mainly taught Plum about physics at such a young age. The curious Plum was always willing to learn more and had studied on some other sections of science too. His humble life, though, did not last long...

One day, Princess Gale had decided to wreak havoc on the entirety of Golden Island, knowing that the flock had the Golden Egg. She sent a sounder of pigs toward the treehouse. Plum, being completely lost in the situation he and the flock were in, had no choice but to run off. He used one of the pigs' rafts to do so. Plum was rather hopeless and thought to himself, that there may be a low choice of him living.

Luckily, he ended up landing on Pig Island later after. Wielding nothing but a mere stick, Plum desperately looked around for resources. After a few hours, he ended up lost in a forest with nothing but a piece of papyrus paper. He notices that the stick that he had just found is a special sort of wood containing graphite, allowing him to write using it.

Several hours passed, and the desperate Plum was tired and starving. The Blues' Flock then find him, a sight for sore eyes. Finally getting to know them, Plum had been provided with some care and had decided to stay in their flock. After rescuing Red's flock, Plum had also decided to join that flock and become the scientist of that flock, residing in one of Professor Pig's old labs.

Plum is probably one of the greatest scientists known to birdkind in Piggy Island and Golden Island. An experiment is always done with ease in Plum's situation. He is prepared and equipped with the necessary apparatus, while making sure that nothing is done without haste. Sometimes, he does go too far with his experiments, volcanic curiosity and his love of science... the three factors of success which can also lead to Piggy Island's doom. Yes, when it comes to science, you'll know Plum will be excited. He also has a disbelief in magic, and everything that is proven "magic" by the flock, Plum will come to a quick objection.

Plum can somehow ignore the laws of physics, and fly in a perfectly straight line. Wait, how is he going to explain that?! Furthermore, Plum is also a pretty average bird who is able to slice through several blocks but he could only smash a long block of stone before falling flat.

Plum's tutor who pretty much always praised him for his good work when he started new lab experiments or finished studying an entire page of Dahlia's science books. Plum always warns Dahlia not to be easily manipulated by other people, especially the pigs. Dahlia doesn't get mad at Plum for interrupting her experiments due to Plum being unusually as smart as her.

Bubbles is one of Plum's best friends who likes candy. He always goes out for trick or treat on halloween with him and the blues. He likes to give Bubbles the best hints for trick-or-treating. They get along really well. However, Plum tries to advise Bubbles not to eat too much sweets.

A long time ago, Janet and Plum were in the same school in Golden Island and they were friends. They loved to create (wait for it) memes and both of their favorite classes are science. Of course, Plum was made fun of having a crush on her but he'd just have to calculate the velocity of bunking a basketball on their head, because they'd GET DUNKED ON. They met up again in the Ghostly Mansion, and they love to do experiments, that's for sure. Janet may be the only one Plum won't act too scientific on.

One of Plum's projects made with the help of Combo and Cerdan. TriviaBird 1000 is not just a robotic questioning bird, but also a friend. Plum and TriviaBird 1000 hang out and venture together. Plum has a remote for TriviaBird to record his voice and send it directly to TriviaBird 1000. 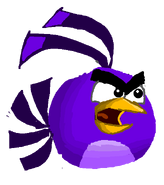 Him in ABU.
Add a photo to this gallery
Retrieved from "https://angrybirdsfanworld.fandom.com/wiki/Plum?oldid=2219"
Community content is available under CC-BY-SA unless otherwise noted.